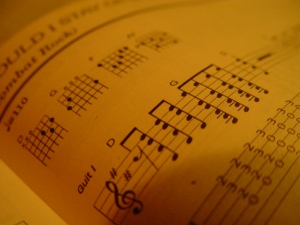 I’m always inspired by music, though I usually prefer silence while writing. Over time, I’ve developed a “soundtrack” that represents various events or characters. At one point, I even had a soundtrack for each POV character, but that’s changed so much I had to drop it for the time being. The songs on this playlist represent about half of everything that’s inspired me, but only when it comes to popular music. I have a whole other list of classical/orchestral things that I use as well. One day I might even post it, if I can get it organized.

A few characters have theme songs. Kendryk for instance, gets The Killers’ “Carry Me Home,” and Arian (who sadly, no longer has a POV, at least for now) is Linkin Park’s “A Light that Never Comes.” Some characters share songs, while others are just general to the story. And that always changes, too.