Okay, I know I already wrote a post about these guys, but in doing further research, I found all kinds of cool stuff. It’s also forced me to succumb to the lure of Pinterest.

Even though my story is still totally fake, I feel the need for at least some semblance of accuracy. Also, I love to geek out about weapons and armour, so this is the perfect excuse. I once spent eight hours in the Arms and Armour wing of the Kunsthistorisches Museum in the Vienna Hofburg. I also bought the catalog- in two volumes- and read it! It’s unfortunately in storage now, but at least I have the internet.

These guys were armed to the teeth! Here’s what a typical Polish hussar carried: 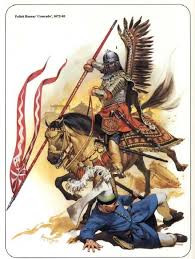 They also often carried an arquebus, but how they would use it while riding, I do not know: END_OF_DOCUMENT_TOKEN_TO_BE_REPLACED